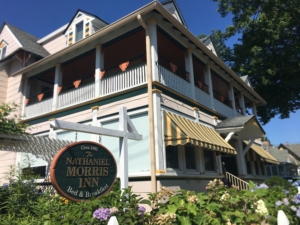 The Nathaniel Morris Inn was built in 1882 by William Longstreet and subsequently occupied by Gilbert Marcellus in 1890.

Both men are considered among the Town’s Founders. The Nathaniel Morris Inn is featured on Manasquan’s Historical Register and was recognized in 1986 by the Manasquan Historical Society as one of the ‘Centennial Homes’ of Manasquan.

The Inn has a varied and colorful history. From 1921 until 1940 the Inn was known as the “Spruce House” Restaurant and Tea Room’ which was owned by Elizabeth Glaser.  Rooms were available by the night, and the Spruce House became a favorite stopover and lodging place for soldiers, sailors and travelers during both of the great wars.

It has also been the summer ‘cottage’ of a wealthy Philadelphia family, a dress factory, a milliner’s shop, a private residence, and finally in May 1999,   Joesph and Barbara Jackson turned it into Manasquan’s Premiere Bed & Breakfast Inn. For the last seventeen years it has been a successful Bed and Breakfast owned and meticulously cared for by the McFaddens.

Then who is Nathaniel Morris?

Nathaniel Morris was one of the earliest real estate developers in the Manasquan area as well as postmaster for Manalapan, a horse and mule trader. In 1872, Nathaniel Morris purchased about 50 acres of farmland – known as the Marcellus tract – and records indicate that by April 1, 1876, the area had been named Sea View Property which consisted of 158 building lots, 50 by 125 feet that were established.  Nathaniel Morris had a dream for his community Sea View – the tract of land located south of Squan Village bordered by Robert’s Swamp Brook to it’s south and the Glimmer Glass to the east.  Sea View was the most successful seaside resort along the New Jersey Coast and would only meet it’s demise when the Central Railroad of New Jersey extension crossed the property into Point Pleasant Beach, ruining the resort’s main attraction – the waterfront. Within two years, at the age of 56, Nathaniel Morris died at his Sea View residence on June 30, 1882.  A visionary, an entrepreneur,  Nathaniel Morris created one of the most idyllic neighborhoods in Manasquan.  Some of the houses still exist today.